Cutting Edge Entertainment was founded in Houston in 1976 by David Cooper. He had a couple of partners and did private & club shows at the height of the disco era, through the late 70’s and into the early eighties. In 1986, Dave and his partners decided to go their separate ways, and Dave wound up with the title to the business and one of the sound systems. He decided to bring the company to San Antonio in 1987. His very first promo picture from 1988 appears below. Dave felt that by operating in an extremely professional manner, putting the customer first, and providing the best possible service, the word would spread and a repeat client base would begin to build.

That it did, and within two years, Dave had added four more systems, began offering lighting, and hired additional disc-jockeys. In 1992, digital karaoke was really taking off, so he added three karaoke systems and started numerous weekly shows in various bars and restaurants.

In 1994, Dave began to grow interests elsewhere and he sold the business to two of his best DJs. It was a seamless transition and there were very few changes made in the operations of the company. An effort was placed to make sure the quality of service continued and that it was the best it possibly could be.

Through the rest of the 90’s, there was experimentation with satellite offices in Austin and Corpus Christi. In the 2000’s, a limousine business was run concurrently with the disc-jockey business. This created a one-stop shop for both services, which brides and other clients found extremely attractive when planning their event.

Now into the next decade, we are more focused than ever. We provide a variety of entertainment services in one market and are thus able to focus on our customer’s needs and provide them with outstanding customer service. We’ve come a long way in almost 40 years, and there’s no stopping us now! 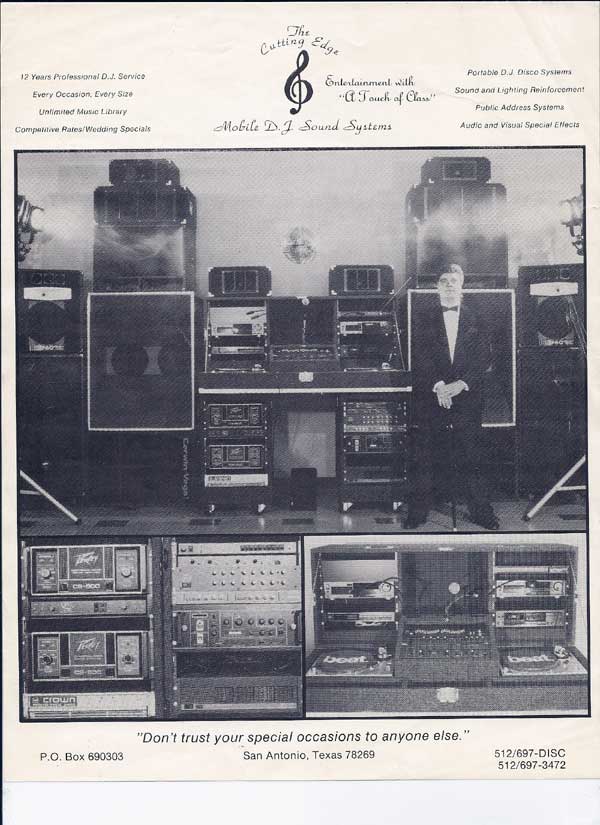